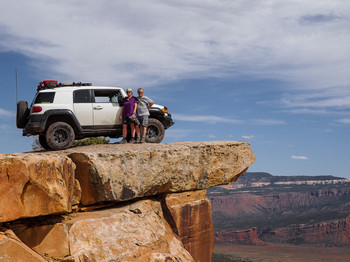 The photo of me on the roof of my car is to honor Ansel Adams.  He spent many days and nights on the roof of his old station wagon getting just the right shot.  My image was taken in Moab Utah in the summer of 2016.

I have been shooting photos for almost 20 years.  The first years were all underwater photos and I used Nikon DSLR.

With a nice selection of lenses, I began shooting landscape images in earnest after a trip I took with Catherine into the Canadian Rockies.  As you can see from my webpage, I like to shoot wide angle; big open land and big skies. I've had several photo journeys through Oregon, Utah, Arizona, Idaho and Washington.

In September 2016, Catherine and I moved to Hillsboro, Oregon.  This brings us closer to some great areas for more landscape photos.

Since you read this far, you get a prize. In 2009, while diving off of the island of Lanai in Hawaii, I had a very close and personal encounter with a large monk seal. A videographer on our dive team captured most of the encounter and it has had a long run on You Tube. I hope you enjoy this:http:/​/​www.​youtube.​com/​watch?v=9PKDbJ-​0gzs